The house on Norrängen was built in 1920 by Oscar Brodén and has been inhabited by, among others, the famous singer Thory Bernhards.

When Norrängen was built, it could be stylistically attributed to the national romanticism and shows kinship with other villas in Broddbo station community that were built during the same period. During this time, the facade was clad with bevel panel and painted with light oil paint. The tall windows were painted white while the ceiling was clad with the very unusual three-cup tiles. On the southern long side was the main entrance, which in front of it had a balcony with a carved pillar and carved sawmills.

In 1947, a major modernization took place as the exterior changed. With the help of spirit plaster, the facades were revived and the windows were repainted in a dark color. The porch with its carved pillars and deciduous sawmills was replaced with concrete pillars and a more columned porch. The porch that was on the upper level got the railings of wrought iron. The three-cup tiles in the southern case have been replaced by glazed tiles in a later conversion. The roof of the northern case was replaced by trapezoidal corrugated black sheet metal. The modernisations that took place in 1947 and later have left their mark on the interior. Inside, the original floor plan remains and to some extent also the original fixed interior.

In the northwest gable room there is an interesting detail that was inserted in 1947. This is the iron hob that is built into the hive over the fireplace. The slab has a cast image that represents St. Göran's fight against the dragon. There is a similar cast image in the county museum's collection in Hedensberg (Tillberga sn.), Which was donated by Count Hamilton. These hobs were actually intended to serve as gable hobs in iron furnaces, a type of fireplace type that most commonly occurred in Scania and Blekinge in the 1600th to mid-1800th century. In Västmanland, however, it never became as popular. In Kulturen's yearbook from 1963 (Lund 1964) you can find a similar iron furnace whose gable hob is similar to the one in the house on Norrängen. This oven was manufactured in the early 1800th century at Huseby mill in Småland. 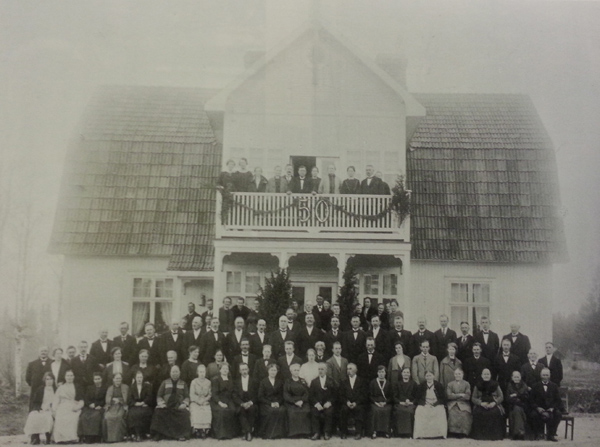 The village of Broddbo is a very interesting village from a historical point of view and their ancestry dates back 6000 years. By the high ridge that runs through the community, apparently Stone Age people have had a rich and grateful settlement. The ridge is a continuation of Badelundsåsen. In all probability, there have been very strong and fish-rich lakes on both sides of the ridge. On the west side of the ridge, Oscar Brodén found stone axes that are said to be over 6000 years old. Oscar Brodén himself also found over 30 step axes and an expensive grip of Limhamnsflinta. It is conceivable that there are more possible finds preserved at the bottom of Rudtjänstmossen. On the western side, it is also conceivable that the ancestors had a more lively settlement. Oscar's collection was first on his farm in Broddbo, but in recent years it was moved to Salaortens Fornminnesförening in Stureparken in Sala.

The community in Broddbo itself has grown since the railway came into being. Before the advent of the railway in Broddbo, the village subsisted almost exclusively on the inn which was located in Broddbo village. The inn could hold up to 25 horses and offered food and accommodation for passers-by who took the main road through Broddbo community towards Stockholm-Västerås-Falun. Salt, herring and spirits were mostly transported to Falun. On the way back from Falun, they brought ore products and tar. But it was not only companies and individuals who passed by. The post office also had its transport route through Broddbo community. However, the inn was closed down and the farmers began to devote their time to the care of their farms, which brought with it the cultivation development that gave the society its current structure. Broddbo By was for many years equipped with a country store, school, post office and an active church. Nowadays you can find farm shops with unique object/ss and the villagers still arrange events, trips and competitions and celebrate holidays in the village farm.

This website uses cookies to improve your experience while you navigate through the website. Out of these cookies, the cookies that are categorized as necessary are stored on your browser as they are essential for the working of basic functionalities of the website. We also use third-party cookies that help us analyze and understand how you use this website. These cookies will be stored in your browser only with your consent. You also have the option to opt-out of these cookies. But opting out of some of these cookies may have an effect on your browsing experience.
Necessary Always activated
Necessary cookies are absolutely essential for the website to function properly. This category only includes cookies that ensures basic functionalities and security features of the website. These cookies do not store any personal information.
Non-necessary
Any cookies that may be necessary for the website to function and is used to collect personal data via analytics, ads, other embedded contents are termed as non-necessary cookies. It is mandatory to procure user consent prior to running these cookies on your website.
SAVE AND ACCEPT
0
your shopping cart
Your cart is empty
Keep shopping
Calculate Shipping